As part of the Lake Eola Heights oral history project, each resident of the neighborhood will be visited by neighbor volunteers and asked a few simple questions about Lake Eola Heights and what it means to us personally. Please welcome these volunteers when they knock on your door, and take a moment to answer their survey questions. If you have any photographs, documents or stories of historical interest to the neighborhood, please take a moment now to locate them, and be sure to mention them to the survey team when they arrive.

If you would like to participate as a volunteer, please call (407) 650-8044 and provide us with your contact information. Your contribution will result in a finished product which will make us proud to call Lake Eola Heights our home.

Over at the Florida Center for Instructional Technology at the University of South Florida, they have collected a bunch of historical maps of Florida, and planted them online. 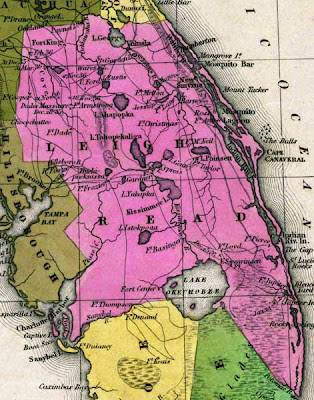 Yeah, it stretched from today’s Marion County down to Captiva Island on the west coast and way past Lake Okeechobee on the east coast. (Orange County was unofficially known as Leigh Read County for a short period of time.)
Posted by Jacqueline Dowd at 8:07 AM No comments:

This is just what we're looking for! 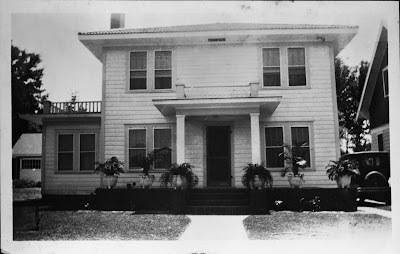 One of our neighbors -- Natalie Sirianni, who lives on Concord Street -- gave the history committee a copy of an old photo of her house which was built in 1924. The car beside the house on the right looks to be about that vintage also. Natalie got it from the person who recently sold the house to her. The previous owner bought it in the 1980s.

It just goes to show that lots of residents, even more recent transplants like Natalie Siriani, can have something of interest in their personal albums.

Do you have an old picture? Let us know!
Posted by Jacqueline Dowd at 10:34 AM No comments:

People are watching from far away

Vistors have come to this blog from Denver, Houston and Seattle as well as Spangler, Pennsylvania; Berryville, Virginia; Florence, South Carolina; and Detroit and Romulus, Michigan.
Posted by Jacqueline Dowd at 11:33 AM No comments:

The Orlando Weekly spotlights our project

In this week's edition, the Orlando Weekly takes a look at our effort to chronicle Lake Eola Heights' past before time runs out.

In 1913, writer Billy Manes (who lived in the neighborhood) points out, Lake Eola Heights consisted of a sparse sprinkling of mid-sized homes and a shelter for tuberculosis sufferers. There was a housing boom in the Roaring ’20s that produced many of the historic homes that characterize the neighborhood today.

Read the article here.
Posted by Jacqueline Dowd at 11:05 AM No comments:

So what do you think?

Now that this blog has been mentioned in the neighborhood newsletter and talked about at the LEHHNA meeting, we hope that people will begin to contribute ideas, stories, memories and suggestions. Just click on the word "comments" below and tell us what you think.

Or answer one of these questions:

■ Do you remember any natural events (hurricanes, freezes, floods, droughts, etc.) that affected the neighborhood?
■ Any major citywide, statewide, national or international events that profoundly affected the community?

The same column also mentions Kena Fries, a resident of Lake Eola Heights who authored a romantic history of Orlando entitled "Orlando in the Long, Long, Ago ... And Now." (You can see the cover -- or even read the whole book -- by clicking on the page listing on the left of the linked page.)

She lived at 1023 E. Livingston St. The house was originally built in 1909 for her father, John Otto Fries, who emigrated to Florida from Sweden in 1871. Fries was Deputy U.S. Surveyor and he served as county surveyor for Orange and Brevard Counties and is credited with making the first copyrighted map of Orange County. In 1900, he took the first census of the Seminole Indians in South Florida.

Read a story about Kena Fries and the Orlando she knew in the Central Florida Episcopalian here. (the article starts on page 8).

Both Kena and John Fries are buried in Greenwood Cemetery.
Posted by Jacqueline Dowd at 8:45 AM No comments:

How our streets got named

Amelia Street* was named for the wife of Charles Henry Munger, who was mayor of Orlando in 1878. He was also one of the owners of the Reporter, which was one of Orlando's first newspapers and eventually became one of the papers that grew into the Orlando Sentinel.

Cathcart Avenue was originally known as Norman Street, for Norman Robinson, State Chemist and Rollins College professor. Read his listing in the General Catalogue of the University of Rochester, 1850-1911, here. The name was changed in 1912. (But who was Cathcart? Anyone know?)

Hyer Avenue was named for the pioneer Hyer family.

Livingston Street was named for J.H. Livingston, who in 1880 was one of the group who bought 26 acres for the purpose of creating Greenwood Cemetery. Prior to 1900, the street was commonly spelled 'Livingstone' on maps.

Robinson Street was named for Samuel Robinson, who engaged in civil engineering and surveying in Florida for 30 years and served as county surveyor for 16 years. He gathered a large collection of gold and silver ornaments from Indian mounds and elsewhere in his travels through Central Florida; that collection now belongs to the Metropolitan Museum of Art in New York. Read more about Samuel Robinson here.

Summerlin Avenue was named after Jacob Summerlin, one of Orlando's founders.

A few more street names still need some explanation. Hillcrest might be obvious; it runs along the highest point in the city. But what about Harwood, Concord, Mt. Vernon and Ruth?
---------------
* In 1962, the city decided that all north-south roads would be called avenues, and all east-west roads would be called streets. The only official exception was Central (which was known as Central Avenue), which was called a boulevard. The new rule went into effect on November 1, 1962, to coincide with the new telephone books.
Posted by Jacqueline Dowd at 11:48 AM No comments: